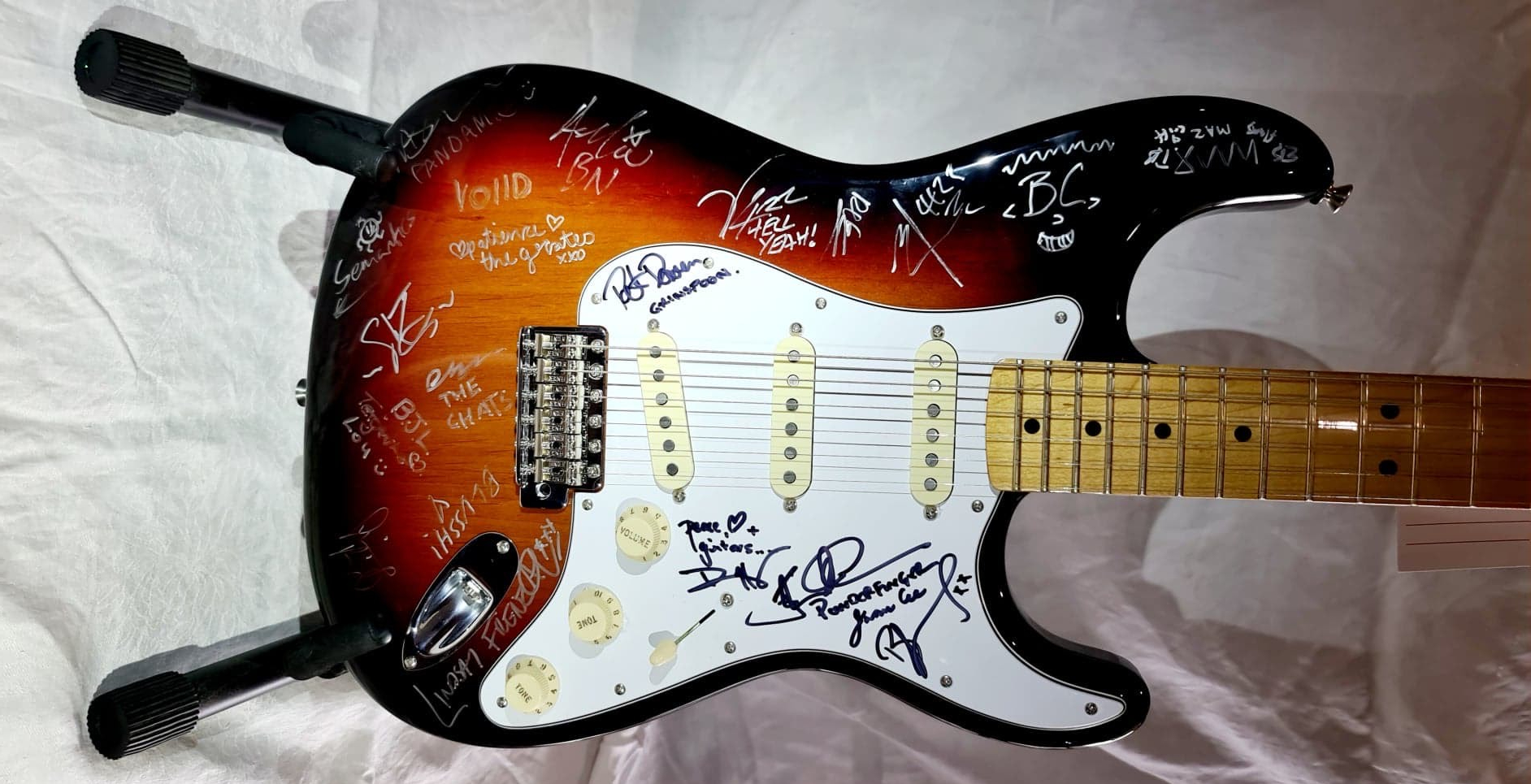 Not every day do you wake up to a message saying you’re nominated for an award, presented by one of Australia’s most popular radio stations. But that’s exactly what happened to Lucas Sutton.

His success had to do with a Fender guitar, the members of Powderfinger and some generous music fans. So, if you’re keen to find out how a resourceful and lucky teen from Queensland pulled off a A$ 12,000-fundraiser without extensive industry contacts or major sponsors, read on.

PART 60 OF “AM I EVER GONNA SEE YOUR FACE AGAIN?” A RANDOM COLLECTION OF UNKNOWINGLY OBVIOUS FACTS ABOUT THE AUSTRALIAN MUSIC SCENE

“Wow, from Europe” – replied Lucas when I contacted him to set up the virtual interview. He’s still genuinely surprised for the recognition he received after the “Help A Mate” fundraiser, organised in mid-2020. But it turns out the 16-year-old (!) from Ipswich hit the charitable jackpot and made some awesome connections in the music biz along the way.

For Lucas, music is a passion and, hopefully, a future career. Aussie rock is his thing. Known as “The Busking Bassist”, he performs at local markets and shares occasional covers on his socials. He also recently joined a band playing original music, although everything is “still in the works”.

His parents are huge music fans, too, and they often accompany Lucas to gigs. When we were chatting on Zoom, they were off to see Bernard Fanning (“jealous” was mine and Lucas’s simultaneous reaction). No wonder their son’s life already revolves heavily around music.

But that’s not all. At 16, Lucas manages a Sydney-based outfit, The Lenores, whose newest merch he was stoked to share with me during the call. Funnily enough, he came across the band whilst organising the fundraiser.

A few months into his artist manager’s stint, and he’s already hit the ground running. The Lenores are set to support These New South Whales soon, which is a pretty huge deal. Plus, Lucas got the band an interview on a Brissie community radio, 4ZZZ before one of their local QLD gigs.

But the “Help A Mate” raffle is definitely the one experience he won’t forget anytime soon. What started as a small gesture for the music community “that hit the ground fast when COVID was at its peak” in Oz, turned into a pretty impressive effort with unexpected results.

Lucas chose Support Act – a mental health charity having the music community’s back Down Under – as the beneficiary of the raffle. “Help A Mate” is one of the organisation’s services which allows pretty much anybody to set up a direct appeal in that field.

His choice wasn’t random, though. Lucas did his research properly amongst musician friends and reading up on different options. He’s already thinking of the next charitable enterprise, this time benefiting men’s mental health charities (respect!).

In the end, over 30 Aussie bands and 25 artists of all shapes and colours got behind his fundraiser for Support Act. They either signed the main prize – a Fender Stratocaster contributed by a local music shop – or donated their own artist merch to the cause.

There were some pretty “insane” items in the bunch: 11 shirts from Hockey Dad, two concert gigs from Karnivool, or a football from Bad//Dreems. Lucas wanted to keep one very original piece of merch sent in by Luca Brasi but resisted the temptation due to the charitable nature of the event.

On the bonus side, the teen from Ipswich got to meet some band members in person and even got to chat with one of his faves, Violent Soho. He remembers Bernard Fanning from Powderfinger as “the nicest guy you’ll ever meet”. He also says everyone was super cool and helpful in his quest.

The J Award nomination was another cherry on top. “Done Good” is a category of accolades presented by the J group (that includes triple J, triple J Unearthed and Double J). Apart from the strictly music-related recognitions (like Album or Artist of the Year), the popular Aussie broadcaster acknowledges a person/organisation/event for their contribution to the Australian music community.

When it seemed that everyone (including the organiser himself) already forgot about the fundraiser, triple J broke the news to Lucas. And he found himself in an incredible company. Who wouldn’t want to be considered amongst the Fire Fight Australia bushfire relief gig organisers or Ziggy Ramo, an emerging First Nations’ artist/activist?

And even though the Award went to the Isol-Aid virtual festival on 19 November 2020, Lucas was stoked for having his fundraiser noticed in the first place.

We talked about all that and some more during our recent Zoom catch-up. I was impressed by Lucas’s genuine concern for the music community and his big plans for the future. So I’m keeping my fingers crossed for whatever comes his way.

To find out what legal obstacles the raffle ran into, which item from Luca Brasi Lucas wanted to keep badly (but didn’t) and in what circumstances he was interviewed about the raffle, watch the chat below. And then say hello to Lucas Sutton – The Busking Bassist – on his socials. He totally deserves it!

Interested in more posts about social causes?
Here they are:

If you’ve been following global news recently, then you’ll know this: the Amazon is burning uncontrollably, a dugong (rare marine mammal), previously rescued in Thailand, died with plastic in its stomach, a 16yo Swedish teenager sailed across the Atlantic to lead a climate strike in the US. Yep, we’re in deep shit on the environmental […]

For those of you who don’t know, #AusMusicTShirtDay is taking casual Friday to the next level. And it shouldn’t really surprise anybody that it is a project from Australia. Aussies love their music scene and any reason is good for them to celebrate. Although it takes place only once a year, on 15 November in […]

For the past two weeks, I have been thinking long and hard about ways of supporting the Black Lives Matter movement in Australia on my blog. Whilst there are limits to what I can do to be an ally of Aboriginal people, music always seems to be the best answer to advocate for positive change. […]