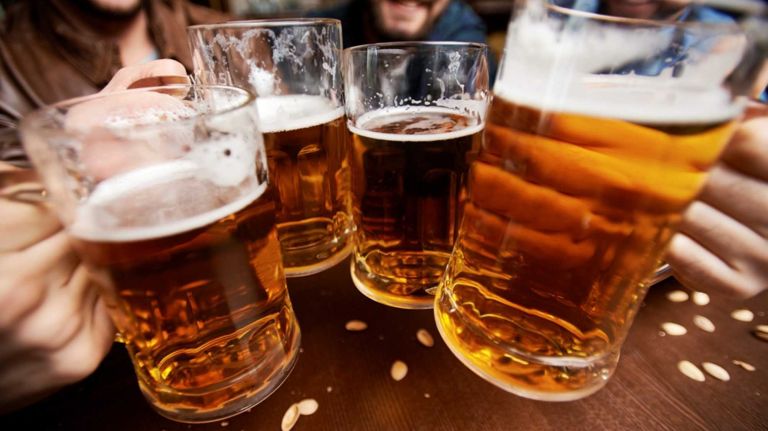 At the end of October 2020, Daniel Andrews – the Premier of Victoria – announced the end of one of the strictest lockdowns that Melbourne and the whole state endured for nearly four months. Victorians finally got the green light to “get on the beers” again.

A visit to an Aussie pub is inevitably linked to music – there is always a live band or a playlist blasted from the speakers. So I decided to check which repertoire is currently trending in the bars Down Under.

PART 59 OF “AM I EVER GONNA SEE YOUR FACE AGAIN?” A RANDOM COLLECTION OF UNKNOWINGLY OBVIOUS FACTS ABOUT THE AUSTRALIAN MUSIC SCENE.

Pub culture is associated mostly with the UK (and Ireland). But let’s not forget who established Australia. Apart from the language, the British also introduced the concept of going out for a drink.

Interestingly, most pubs, bars and taverns in Oz are called “hotels”. That’s because, historically, only those sorts of businesses were allowed to legally serve alcohol to walk-in guests. So don’t get confused looking for a place to down a pint when you make it to Oz.

Some rankings and studies have already been done on the relationship between gastronomic establishments in Oz and the music played there. But I wanted to know about Aussie songs played in Aussie pubs, not the usual international hits, like Bon Jovi’s “Livin’ On A Prayer” or Chumbawamba’s “Tubthumping”.

The best and easiest way to approach this research was by asking my Oz-based friends and contacts. And that’s exactly what I did. But because I’m a professional (LOL), I used a scientific method in the form of a li’l survey. I gotta admit – some interesting things came up.

In all fairness, my respondents’ answers are their opinions and observations rather than facts set in stone. They are also hugely dependent on their location within Australia (smaller town or bigger city), whether they go to pubs regularly and are music fans at all. The point of this exercise, though, was to get a variety of tastes and see if there was any repetition in the survey replies at all. I’m stoked to say that I managed to reach that objective. And the pattern is there.

For instance, the respondents seem to think international music still considerably dominates in the pubs. Although, in The Rona times, they’ve noticed a trend to support local artists, with more Aussie bangers included in playlists. And it does matter, to a certain extent, whether the music in the pub they’re heading to with friends is good. Whenever they have been allowed to go to a pub in 2020, that is.

The most intriguing and fun part for me were the questions about favourite Aussie anthems, and the least welcome tunes played in pubs. It turns out there’s a pattern in both these categories as well.

I’ve written about the songs defining Australia for me in this post already. Funnily, a lot of them overlap with the survey findings. And many of them I’m a big fan of myself. So, it’s not my intention to judge any Aussie artists or punters’ music choices. But we all know how it works.

Radios have killed heaps of good tracks over the years, regardless of what our feelings towards those songs are (think about Oasis and how overplayed “Wonderwall” has been globally on the radio since it was released in 1995). It’s pretty much the same with pub playlists.

In that spirit, but without pointing any fingers, here are some results of the survey.

1. The three Aussie songs you’re pretty much guaranteed to hear in Aussie pubs at some stage are true classics: “Khe Sanh” by Cold Chisel, “The Horses” by Daryl Braithwaite and “Throw Your Arms Around Me” by Hunters & Collectors. They were all released between 1978-1990.

2. You’ll find a variety of styles and genres amongst the Aussie tunes everyone in the pub will be singing to. For example: “The Nosebleed Section” by Hilltop Hoods (hip hop, from 2003) might follow “You’re The Voice” by John Farnham (soft rock, released in 1986).

3. There are also songs that punters wish were given a bit of a rest, like “Dance Monkey” by Tones And I (that exploded only in 2019) or “Down Under” by Men At Work (from 1981). Not because they’re crap, though, but because sometimes less is more.

To give you an overview of the tunes that have appeared in the survey, either as a fave tune or a slightly overplayed one, I’ve put together a playlist on Spotify. Check it out below.

You’ll notice The Angels open up the playlist with their most popular track. It also happens to be the title of this blog series, “Am I Ever Gonna See Your Face Again?”. If you want to fit in Down Under, you GOTTA know the lyrics to this one – the chorus is fairly easy, you’ll be shouting it along very often. There’s an unofficial part of the lyrics, too, a response to the question posed in the chorus. It’s very Aussie. Ask your mates about it when you get a chance 🙂

I also added a song that I reckon fits the playlist perfectly, “Pub Feed” by The Chats. You’ll see why when you listen to it, for sure. It’s fairly new (from 2020) and I reckon it’s hysterical. This is where the headline of this post comes from as well – it’s a quote from the track’s chorus.

Most groups on the playlist are easily recognisable, like Midnight Oil. Sometimes they appear more than once, with different songs that are not always their most famous ones (the case of INXS). There are also some outfits that I’m pretty sure are less known overseas. I want to dedicate some space to three of them.

Spiderbait are legends from New South Wales. The band members have also been involved in heaps of side and solo projects over the years but the group itself has released seven studio albums. Their tune “Black Betty”, that made it to my survey, is a cover of an Afro-American work song. And it placed as no. 1 on the ARIA singles chart in 2004 when it was released.

Magic Dirt are a rock band from Geelong in Victoria, established in 1991 (although they were on a hiatus from 2010 till 2018). They’ve released heaps of music over the years and been nominated for a few ARIAs, too. Their song “Dirty Jeans” (released in 2000) apparently makes sporadic appearances on pub playlists Down Under.

Last but not least, “Eagle Rock” (released in 1971) is one of the oldest songs mentioned in the survey. The Melbourne band behind it, Daddy Cool, is still going, though, despite a few periods of inactivity. “Eagle Rock” was their first ever single that landed them right at the top of the Australian charts. They have also been inducted into the ARIA Hall of Fame.

Summer is coming to the Southern Hemisphere and Aussies are slowly getting back on the beers. If you happen to be Down Under now, lucky you! So, do me a favour, please.

Next time you’re out and about, tune into the local classics blasted through the speakers in pubs, bars, taverns and hotels. And if any songs you reckon should be there are missing on my playlist, hit me up with their names – I’ll add them.

Check out my other posts as well:

This post is for all emerging acts out there. This week, I have decided to lend this space to an up-and-coming muso. Because I could never tell the story of what it means to be an independent artist better than that artist himself. Especially that he wrote a song about it, in which he talks […]

If you care about lyrics in Aussie songs, this post is for you

Let me pose a few questions to start. When you hear a new song, what do you listen to first, the melody or the lyrics? How often do you check out instrumental music? Can a shallow message throw you off a track, even if it’s got an awesome beat? Do the lyrics matter to you […]

In 2019 (or what we now know as “the last normal year for live music before the Rona”), I accidentally ended up at the Pol’and’Rock festival. It’s a huge, completely free (not a joke) European music event with a pretty diverse line-up of both local and international artists. Two Aussie acts were scheduled to perform […]