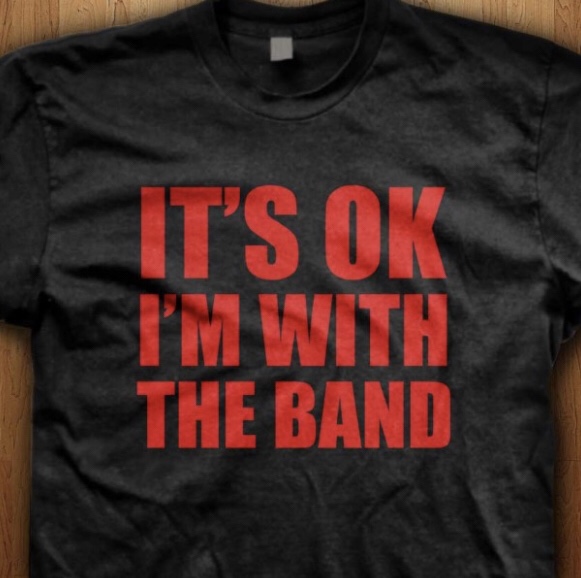 For those of you who don’t know, #AusMusicTShirtDay is taking casual Friday to the next level. And it shouldn’t really surprise anybody that it is a project from Australia. Aussies love their music scene and any reason is good for them to celebrate.

Although it takes place only once a year, on 15 November in 2019, it is THE day to showcase your music taste without being judged or frowned upon. It was organised in 2014 for the first time and it looks like it has already been widely accepted Down Under. I’d even risk a statement that it should be mandatorily adopted in other countries in the world.

PART 21A OF “AM I EVER GONNA SEE YOUR FACE AGAIN?” A RANDOM COLLECTION OF UNKNOWINGLY OBVIOUS FACTS ABOUT THE AUSTRALIAN MUSIC SCENE

#AusMusicTShirtDay is a nation-wide celebration, a joined initiative of Triple J radio station and ARIA (Australian Recording Industry Association). Both musos and music fans alike play an important role in it.

Apart from not having to wear a suit to work, #AusMusicTShirtDay also means raising funds for a good cause. In 2019 the chosen charity is Support Act again – a nonprofit that helps music industry professionals facing hardship. Like any other fundraiser, it welcomes donations and creating teams. As of today, 13 November, more than half of the set target of AUD 80,000 has been reached. And there are still 3 more days to go.

There are also more reasons why #AusMusicTShirtDay is important.

The first one is health-related. Numerous studies show that musos are especially prone to mental health issues which – in turn – can lead to hardship. It is a complex and sensitive topic that is still very much underestimated. It has recently been explored in a bit more depth in this episode of The Dirt podcast. And mental health is one of the areas Support Act helps with.

The second reason why #AusMusicTShirtDay is important for musos is a little more down to earth. Selling merch is a significant revenue source in the music industry. Triple J journos have examined the topic on the Australian soil here. Apparently, Levi’s and other apparel companies have partnered with some of the most famous and biggest Aussie acts (i.e. INXS, Midnight Oil, Silverchair or Angus & Julia Stone) in 2019 to design and sell their merch with the cause (Supprt Act) in mind. Even Warner Music Australia has decided to chip in in their own way.

Last but not least, band T-shirts are a powerful marketing tool, too. It’s happened to me a few times to check out an act (especially in Oz) after seeing fans wear their tees. Let alone feeling like you belong to a bigger family when you meet your tribe, i.e. people who like the same music or artists.

That’s why on Friday I will let my Aussie mates speak instead of me, telling their own stories about the Australian music scene. So stay tuned in a couple of days for part B of this post 🙂

Check out more on this topic:

Today is 15 November 2019 – aka #AusmusicTShirtDay – a totally legit reason to talk about Australian music. If you’ve missed it, have a read through my post breaking this Oz-wide event down to basics. But there’s no better way to show you what it really means than through the eyes of Aussie music fans…

4 thoughts on “Need another reason to wear your favourite band’s merchandise? Join #AusmusicTShirtDay”

Follow Silly McWiggles. A blog about Aussie music. on WordPress.com
Join 290 other subscribers

Preach!☝🏻
A li’l preaching never killed nobody 😉
I (always) pick #franksinatra ⚫️
If one #picture 📸 can summarise my #2022, it’s this👆🏻one.
What a jungle indeed 😉
Sometimes, on Sundays, I’m a radio DJ 🎛️ Like today, on @radio614 for the @culturalpopcorn show. And I’m taking you on a tour around the world. Take-off time (in different time zones) in the comments. Don’t be late ‘coz I won’t wait 😉 #sillymcwiggles #radiohost
Just saying…
Here’s proof that #musicaleducation is important - @thewiggles presented the 2022 @aria_official award 🏆 to the #bestteacher Matt Orchard 👏
Watching @aria_official awards 🏆on @youtube be like... (Congrats to all the 2022 winners & nominees! 👏)