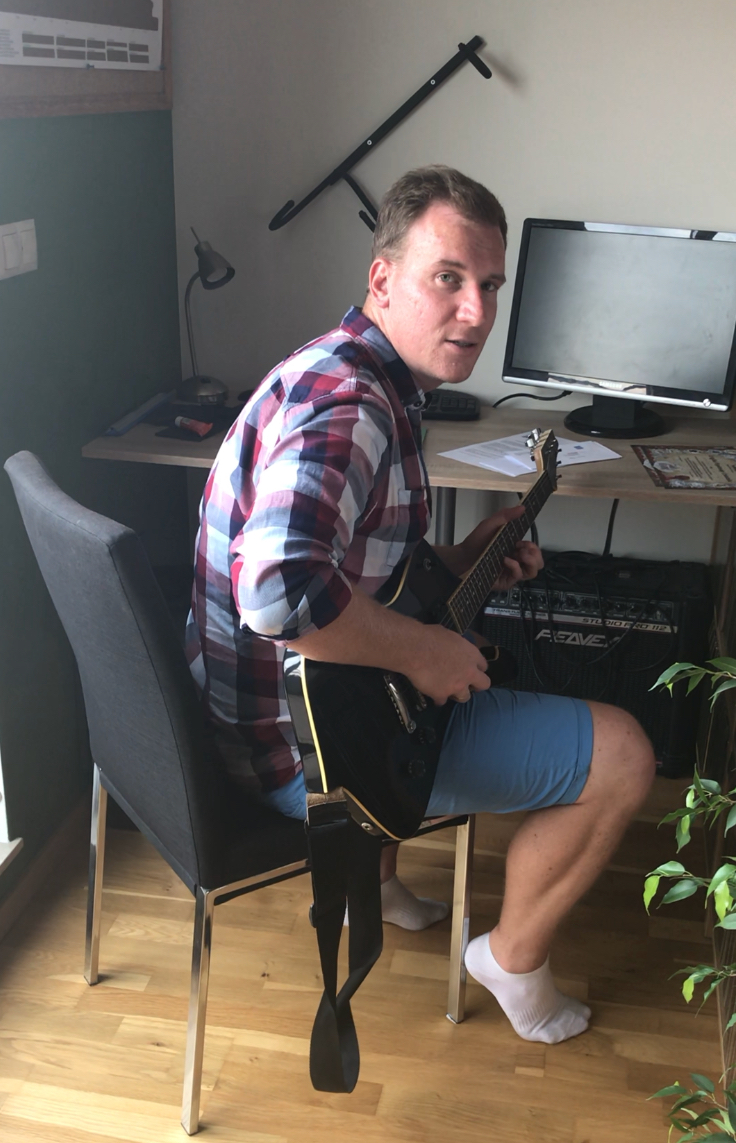 Matt plays the guitar and he rocks it but is very modest, so he doesn’t brag about it. But it’s time I did 😉

My brother plays the guitar because of me. He plays it because I never learnt.

Whenever I see my brother, I always joke that he should have become famous, I should have been his manager, and that way everyone would be happy, living their music dream. But I never quite remembered how that joke started. I only knew it had something to do with a guitar. Luckily, we had a brother-sister catch-up recently, so I had a chance to ask him about it.

*** Spoiler alert: after reading the below transcript of our conversation you will have pretty much figured out our (similar) music tastes. So if you’re not ready for it, read no further 😉 ***

SILLY – Do you still have your first guitar?
MATT – Yeah, I do. But I haven’t used it for ages. (He pulls it out from under the bed. It’s missing a string. He blows a few times to remove the dust covering it everywhere. Then he tunes it and tries to play something but it doesn’t sound the best.) I should probably look after it better.

– True. But I don’t remember much about it. Do you?
– Vaguely but I know it’s yours. You listened to music from a very early age and you wanted to play the guitar. You were a true pain in the neck (He winks at me) when it came to things you really wanted. So Mom asked for help one of our “uncles” who had a clue about musical instruments and they got you this beauty.

– You’re right – now I remember. It’s a shame I never started playing it. I don’t think I even had one lesson… So how did you get your hands on it?
– When I was about 14 and you were away in the US at school, we had an Aussie exchange student, Elisa, living with us. She was taking piano lessons and her teacher knew someone who was giving guitar lessons at the time. Since the guitar was already there and I was also an avid music fan – thanks to you, by the way…

– … no way! You’ve finally admitted it. Hallelujah!!!
– Haha, yeah. You know: “I’m a victim of good music” (We’re both laughing at the joke.) Anyway, I started having lessons with a visually impaired teacher, which was pretty cool because he experienced music in a different way.

– So what did he teach you?
– The basic stuff at the beginning: the chords, scales and bluesy improvising. Later on, he showed me some riffs. Let’s see if you’ll recognise this one (He plays a very famous Polish track “Whisky” by the band called Dżem.) And also, something right up your alley (He starts playing the first notes from Nirvana’s “Come As You Are”).

– Yep, they both sound familiar. And what was the first entire song you learnt?
– (He thinks for a while.) I reckon it was Offspring’s “Self-Esteem”.

– Nice. So what happened next?
– And then I started learning by myself. I would normally look for guitar sheet music online. I remember there was an awesome Tower Records store on Piccadilly Circus in London that later on became Virgin Store. I got some sheet music there as well – I think it was for Sum 41.

– So you basically taught yourself from then onwards?
– Yep. But with the help of some websites that stored tabs, like Ultimate Guitar Tab. In Poland we also have what we call “bonfire or camping” songs that are good training tracks so I practiced a lot on them. People from overseas probably won’ know them but you can still quote a few song titles, like “Wehikuł czasu (Time Vehicle)” by Dżem, “Teksański (Texan)” by Hey or “Nie płacz, Ewka (Don’t cry, Ewka)” by Perfect.

– You also committed some tracks, right? As far as I recall, they were pretty good. And you recorded everything yourself: including the vocals and drums.
– (He blushes.) I did indeed. There were loads of really awesome programs available online that I used. I think Audacity or Guitar Pro with Realistic Sound Engine were the main ones. It makes your life way easier and you can put th whole thing together yourself, without having access to expensive equipment or tools.

– Do you still have those tracks somewhere? Can I use a sample?
– Sure thing. I’ll send you some and you can pick the one you like best.

– That would be awesome, thanks. Now tell me about the band episode. What was the name again?
– (He laughs.) There was no name. We never quite got to that stage. There were three of us school-mates, musician-wannabes. Plus, we never found a good drummer so it was really more like a pseudo-band, just a few guys fooling around with guitars.

– Good that you tried, though. So this is when I started with that “Why did you never become famous…” joke?
– Pretty much. Sorry to disappoint you. (He winks at me again.)

– Speaking of which… From the time perspective, why did it never work out for you? Why did you not try to pursue it any further?
– That’s a good question. I guess it’s because I’m too bossy to be in a band (He grins.) And seriously, it’s maybe because I make… made music more for myself than anybody else. And that’s fine with me.

– And I totally respect it.
– But I did actually try to do something about it. There was once a website… I don’t know if it still exists… called California Punk. Basically you could advertise locally if you were looking for musicians to complete your band. I did put out an advert but nobody ever replied to it and I kind of forgot about it.

– That’s interesting. You never told me about that bit. So what are your favourite music genres nowadays?
– I guess it’s generally guitar music.

– Give me some band names so I have a better idea.
– Bullet for My Valentine would be one. (He thinks for a while.) And a Polish band called Frontside to give you a taste of the local music scene.

– I like that you threw a Polish name into the mix. Do you remember any gigs we went to together?
– Totally. Let’s see… Korn, Offspring, Pearl Jam and Metallica, for instance.

– Yep, that sounds about right. Good times (We high-five each other.) So who’s your guitar hero? I mean, a guitar player that you really think influenced music and is someone you look up to.

(He gives it a good thought.) You’d probably think I’m going to name one of the guitar virtuosos. But no. It’s actually James Hetfield from Metallica.

– Oh wow. Really? Why’s that?
– Well, I just think he’s really skilled at writing very melodic, timeless songs, with awesome guitar riffs, successfully mixing quite a few different genres at the same time. If you think about it, Metallica has been around for a few decades and still has a very faithful fanbase.

– Including us. Okay, so I’ve left the most important question till the very end. What’s the guitar you play these days?
– I have the Ibanez Iceman. I bought it because at that time I listened a lot to System of a Down and Daron Malakian played it. So I can say that we both have the same guitar (A wink again.)

– Will you play something for me now?
– Sure. How about some Polish classics? (He laughs.)

Here’s a #livemusic story with a twist. After a 1.5 year of no #gigs at all, you finally get a chance to see an outdoors one. The band are thrilled because they can finally play again, the crowd is happy because they can finally see their fave band. And then, three songs into the set, there’s a short circuit and everything goes to shit… 🤦‍♀️ Bad karma?
Kinda how I feel rn
How to turn an ancient Roman theatre into a modern outdoor gig space? Like that👆(Effing great acoustics btw)
Hey, I’m Silly. Sometimes I listen to records. Wanna send me yours? 💿
@decathlon T-shirt game is strong 💪
“I only wanted one time to see you laughing /
Happy hippie times 🌸
❤️
Finally, here’s the last pair of my fave pics from #musicfromthehomefront 2021 📷