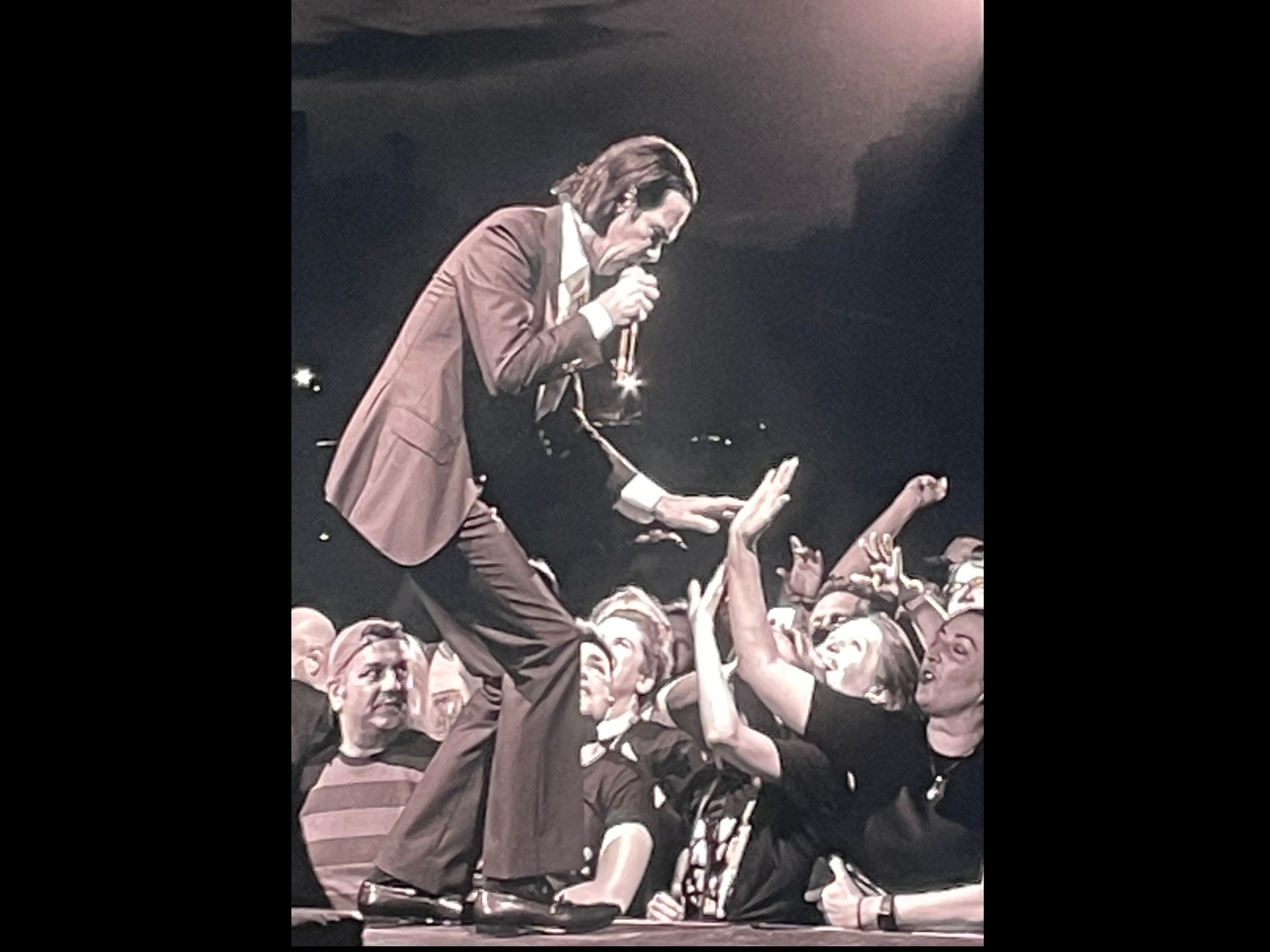 Anyone who has been to a Nick Cave and The Bad Seeds’ concert will know it’s an experience like no other.

The explosive energy on stage, the uniquely close interaction with fans, and the awesome journey through the artist’s vast catalogue are worth every penny.

And even though everything has probably already been written about Nick Cave’s performances with his equally famous band, I feel like I need to put my two cents into the review mix. Because – believe it or not – it was my first time seeing the artist live.

PART 118 OF “AM I EVER GONNA SEE YOUR FACE AGAIN?” A RANDOM COLLECTION OF UNKNOWINGLY OBVIOUS FACTS ABOUT THE AUSTRALIAN MUSIC SCENE / THE SILLY & GREEN PROJECT

So here’s what happened.

I went to the last day of the 2022 edition of All Points East. It’s a festival of music and entertainment in East London’s Victoria Park, with headline shows and free activities during the week. It’s been running since 2018 (except for 2020 when it was cancelled, for obvious reasons).

This year, a few Aussie acts were on the festival’s line-up. Tame Impala and Nick Cave headlined two dates. Parcels played on the day when The National led the bill. And King Gizzard & The Lizard Wizard were meant to perform then as well, but needed to cancel last minute due to health problems.

Every day is a different vibe at All Points East. Sometimes, it’s a dance music party, on other days – a rock gathering. And from time to time, it’s an overview of acts that are slightly more unconventional, incorporating other forms of art, like poetry, into their craft.

I’m 100% certain there’s no point in introducing the Aussie troubadour to anyone. He is one of the most influential and respected creators in the world today. But I need to share a few facts and (fairly objective) opinions about the artist because they are important to this particular story.

As I’m typing this, Nick Cave is about to turn 65 in less than a month (22 September). He’s been active in the music industry for nearly half a decade. The gig he played at All Points East was over 2 hours and 10 minutes long, with 20 songs and a 2-minute break before the main set and the encore.

Now, I’ve heard all kinds of stories about the Aussie muso’s gigs and seen footage from various performances. But nothing compares to experiencing it live. What a personality he is on stage!

The best way to describe the concert is by comparing it to a Greek tragedy, with all its plot twists. You never know if somebody is going to faint in shock or scream in awe in the next scene. The show is simply wild. Nick Cave is completely mad. And the band goes all out, trying to keep up with the charismatic singer. Because he’s also one of the very few people I’d dub a “performance genius”, without the shadow of a doubt.

What also validates an artist’s worth, at least in my view, is being on time. You might laugh, but in recent years, too many mega stars have been “taking their time” before starting their sets, to put it diplomatically. I remember once having waited for Rihanna to come out for an hour (#notcool).

I agree that being an artist is not an occupation in the same way that selling clothes from 9 to 5 is. And I do acknowledge that it requires a certain mindset and preparation to perform. But it does mean delivering what is promised to customers – gig-goers in this context. If the audience can be there on time to keep their side of the bargain, so can the artist. That’s the job.

So, not only did Nick Cave kick off his show at 8.10 pm when he was scheduled, but he was 2 minutes early. And when I say “was”, I mean he stormed out on stage like a hyperactive teenager since the band opened the set with the dynamite banger, “Get Ready For Love”.

That powerful entrance was followed by “There She Goes, My Beautiful World” and “From Her To Eternity”, with Nick (literally) running from one side of the platform, that extended from the stage to the crowd, to the other, jumping and throwing kicks high in the air.

Only the fourth song saw the artist sit at the piano to perform “O Children”. Considering he does the same thing every other night on tour, I want to know how he even stays so fit after nearly 50 years in the business.

On that note, what struck me at the gig was how, within seconds, Nick managed to switch from a true rock star, belting out lyrics to “Vortex” in front of the excited audience, for instance, to a vulnerable artist, sitting at the piano and singing “Into My Arms”, or a supportive bandmate hugging his long-time collaborator, Warren Ellis, saying “That was from the crowd.”

In the highly scripted world of celebrities, who frequently put on different masks and hide their true personalities on stage, it’s refreshing to see a world-class performer not afraid of showing genuine emotions or straying from the general gig “run sheet”.

To everyone’s amusement, he also shared a few stories, which helped everyone catch a breath between songs. One of them involved a bad habit of his.

“Somebody wrote to my management company recently with a complaint because I spat on stage. They claimed that, in this day and age, it’s unhygienic”, he reminisced sarcastically. “They should see what Warren and I get up to off-stage then.” Only if you’re Nick Cave can you brush away valid feedback like that and get away with it.

Speaking of more things that only Nick Cave can pull off. I don’t know about you, but I can’t think of too many artists of this format who let gig goers so up close and personal during a live show. But the Aussie legend clearly feeds off the audience’s energy and reaction. He spent most of the time singing directly to people rather than playing with The Bad Seeds on the actual stage.

All the Harry Styles’ groupies and stans are amateurs compared to the amount of touching Nick affords his fans. I’m surprised his arm didn’t go numb from all the hand-shaking and hand-holding. He also uses eager members of the audience to hold his mic when he feels like singing and gesturing at the same time. And there’s no shortage of volunteers, trust me.

That, unfortunately, has some downsides, too. At one point, he said to the mic, “What are you doing, woman? This is sexual harassment in the workplace.” So I’ll let you be the judge of whether that’s a good or bad thing.

To set the record straight, one other thing needs to be stated here. All these shenanigans with the fans did impact Nick’s vocal delivery. How could it not! He was constantly on the verge of crowd-surfing and falling uncontrollably. At one point, fans nearly dropped him to the ground. So he ended up singing in the crowd, even though they promptly lifted him back up. I guess it’s “business as usual” in the Nick Cave world.

In the time between songs, the artist would also hold private mini conversations with fans, answering their questions and inquiring if they were okay. That’s why crowds love him and treat him as God to a certain extent, I reckon.

One thing’s for sure, the amount of trust the artist places in the audience members is unheard of these days. Plus, the fact that his perfectly fitted suit stays intact after all that mayhem is inexplicable to me.

Speaking of the fans, the crowd’s composition was every demographer’s “wet dream”. From teenagers to retirees, people speaking English as their native language to tourists, regular gig goers to one-time attendees dragged out of the house by their partners, etc. So it’s true that he’s one of those artists who appeal to diverse social groups.

What’s more, even the millennials knew the lyrics to many of the songs. Maybe because the set was a diverse mix of “the greatest hits”. Nick has a habit of introducing the tracks, so every time he would announce the title of the next one, somebody standing next to me in the audience would say “That’s my favourite song”.

He played “Jubilee Street” and “I Need You”. But there were also tunes from his more recent releases, like “Bright Horses” (from Ghosteen) and “Carnage” (from the album he recorded in 2021 with Warren Ellis).

The All Points East audience was also in particular luck that evening. Quite unexpectedly, even for the band, they were given the green light to play an extra song after their usual encore, finishing on “Ghosteen Speaks”. So the London fans were sent off with “The Weeping Song”.

Overall, I don’t know what I was expecting. But the show blew my socks off. Mostly because Nick Cave and The Bad Seeds played like it was their last gig on earth.

It wasn’t a perfect performance, vocally speaking. But the fan’s ecstatic reaction to the singer says it all. And I guess that’s what counts, at least for the fans.

Nick Cave and The Bad Seeds

P.S. I rarely talk about non-Aussie musicians on this blog. But the rest of the acts I saw at All Points East on the day Nick Cave headlined also deserve a mention for their originality and transcending different artistic disciplines. If you have a chance, check out Kae Tempest, Anna Calvi, Michael Kiwanuka (all UK artists), The Smile (UK, Thom Yorke’s and Jonny Greenwood’s “new band”), Jehnny Beth (UK/France) and Aldous Harding (New Zealand).

Fractures played an intimate set in London, and I realized small club gigs are totally my thing

When it comes to music choices, I know I’m totally biased. If an Aussie act is playing in a venue near me, there’s a 99.9% chance I’ll go see it. I guess that “occupational hazard” comes with the job. Those shows are normally a hit-and-miss. But sometimes, they’re a worthwhile experience leading to new music […]

Sampa the Great wows the crowd at the Open’er Festival. Gig review

The first time I saw Sampa the Great was slightly unusual. She was one of the artists featured at the TEDxMelbourne event in September 2017 at the Melbourne Convention Centre. The musician’s message was very fitting for the theme of the whole conference, which was “Rebels, Revolutionaries & US”. And even though she performed just […]

Budjerah is the next big thing in Australian music. His gig at London’s Jazz Café was a testament to that

When a performer walks out on stage with only a guitar in his hand, you know you’re in for a real treat. When he then sweeps the entire audience off their feet with his powerful vocals, you know you’re experiencing a special moment in that artist’s career. That’s exactly what happened on Tuesday, 10 May […]

Follow Silly McWiggles. A blog about Aussie music. on WordPress.com
Join 283 other followers