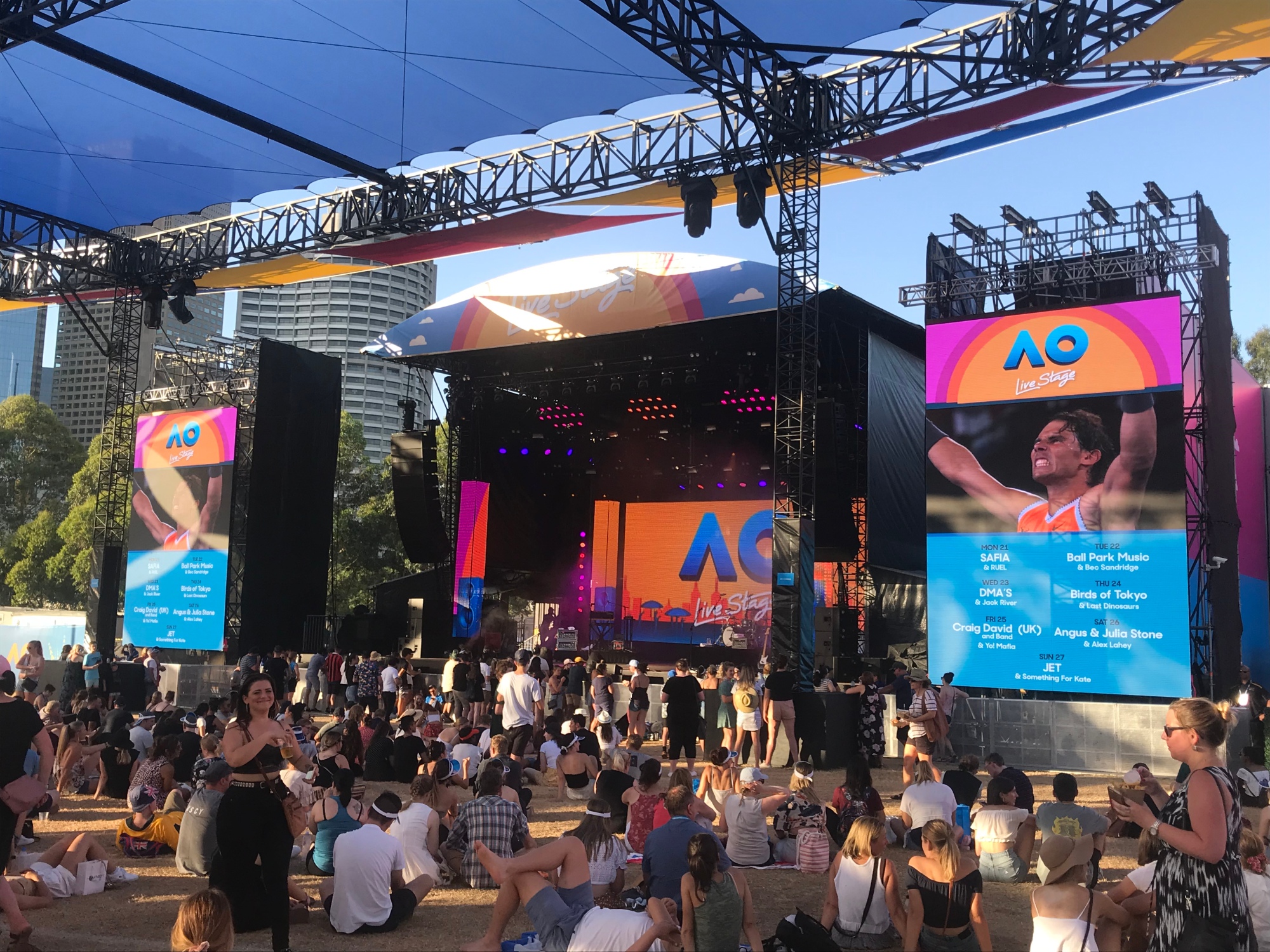 Let’s talk about tennis. I know very little about it but living in Melbourne it’s impossible to ignore it.

Part 5 OF “AM I EVER GONNA SEE YOUR FACE AGAIN?” A RANDOM COLLECTION OF UNKNOWINGLY OBVIOUS FACTS ABOUT THE AUSTRALIAN MUSIC SCENE

Australian Open (AO) is hands down one of my favourite sporting events. Maybe it’s because of the premises (Melbourne Park) and amenities. Or maybe it’s all about sipping Aperol Spritz at Garden Square, hanging out with friends at Grand Slam Oval and watching Roger Federer at Rod Laver Arena. But it’s also because AO is no longer only about tennis.

I’m sure you know that Australian Open is a pretty famous tennis tournament, a part of the Grand Slam series. It takes place in the second half of January, exactly when the festival season in Oz is in full swing, and the weather in Melbourne is smoking hot (literally!). Even though the dates fall in the middle of school holidays, heaps of people (including celebrities) from all around the world come to town to see a match or two. The main part of the competition lasts for 2 weeks and there are heaps of accompanying events, catering to different types of tastes. For instance, there is an AO Film Festival, screening movies somehow related to tennis. AO is also a good place to just hang out with friends and the crowd is pretty funky and diverse. That’s why it’s impossible not to have some kind of music event, entertaining punters between the matches.

The above is not my mini festival line-up wishlist but an actual AO Live Stage 2019 poster. That’s right, Ladies and Gentlemen: the AO organisers realised a few years ago that music is a decisive factor in attracting new audiences to a tennis tournament. And they also assumed (quite right, actually) that Melbourne music fans don’t necessarily need to be very knowledgeable about tennis, either, and they will still come to AO.

Earlier editions of the live music sessions at Australian Open, known as Heineken Live Stage, took part at Grand Slam Oval and featured mostly local artists. The first series branded AO Live Stage at its current Birrarung Marr location happened in 2017. And, in all fairness, the organisers have been nailing the concept ever since. There are live gigs every day in the two weeks timeframe, with both local and international headliners and support acts. And they’re a good mix of genres, from beloved blasts from the past to current hit makers and promising newcomers.

Take the 2018 line-up, for instance. There’s virtually no party without Daryl Braithwaite’s Horses song. Angie McMahon was making waves towards the end of 2017 as an up-and-coming singer-songwriter. Illy is a popular local hip hop artist. The drum-and-bass band, Rudimental, were guests from the UK. Pierce Brothers started out as Melbourne folk buskers. The Rubens play alternative rock. Truly something for everybody.

Interestingly, that same year there was a bit of a mishap. TLC, who were the ultimate headliner set to perform on the Men’s Final day – the culmination of the whole event, never even appeared on stage. The word on the street is that the two divas didn’t feel comfortable singing in the nearly 40-degree hit. But, officially, a computer meltdown was cited as the reason for cancellation that left hundreds of people very disappointed on the day. Hopefully the AO Live Stage organisers learnt their lesson, that sometimes less is more, and that smaller is bigger when it comes to booking music acts for this sort of event.

Nevertheless, AO Live Stage is a really good chance to catch your favourite acts in a more casual setting, without the pressure of a tour or heavy self-promotion on the artists’ side. Punters who come to watch live music at Australian Open are there having a good time already. And so are the artists. Check out these two performances I filmed at the 2019 edition.

And here comes the best part. Remember how I discussed live music prices in part three of this blog series? And we settled on an average ticket costing around AUD 80-100? Forget all that. TheAO Live Stage shows are included in the FULL DAY ground pass that costs just over AUD 50. That’s right – you can see Gretta Ray AND Craig David on the same day for that price. Plus, some awesome tennis matches, since you’re there anyway. How good of a deal is that?!

In 2019 the AO Live Stage marketing team came up with a very fitting slogan “Rethink the sounds of tennis”. And that’s exactly what they did – to the point of totally flipping my January budget. If it continues like that in the coming years (and all signs point to it), I’ll go broke very soon. But, on the positive side, I’ll learn heaps more about tennis, too.

Love live music events?
Here are posts about some other ones in Oz:

Why Laneway is one of my favourite Australian festivals

I have referred to Aussie music festivals multiple times on this blog because music events come in all shapes, colours and sizes in Oz. Especially in the summer you can basically spend your time following the biggest events around the country and not have a break for one weekend. Pretty cool, hey? PART 29 OF […]

Queensland – get ready for your new favourite music venture, the Coochiemudlo Island Festival

When Bluesfest was cancelled for the second year in a row and just one day before its kick-off this past March, many event organisers (including Bluesfest’s founder, Peter Noble) were surely shocked. Suddenly, questions about the feasibility of staging any outdoor gigs anytime soon started being taken more seriously again. Even the ones with proper […]

Let’s have a BluesFest this Easter

This Easter will be different for many reasons. No family gatherings, nature trips, religious celebrations, meetings with friends… All the events that normally take place over this festive weekend have either been cancelled or postponed. And for the first time in its 30-year history there will be no Bluesfest, either. PART 33 OF “AM I […]

3 thoughts on “What does Aus Open have to do with music? On Melbourne, tennis and live music stage”

Follow Silly McWiggles. A blog about Aussie music. on WordPress.com
Join 283 other followers